Christmas Competition and "Two for Hooking"

This piece is awesome.  I’m speaking of the whole piece Roman Festivals.  This is just the fourth movement (of four) and in my opinion the most exciting.  Now I’ll admit this performance isn’t the cleanest or well executed (and it’s a little “too fast” in some peoples opinion.... not mine), but it’s freaking fast and energetic.  It has an unbridled passion and drive that I feel only young orchestras can really manage.

Two for Hooking was actually written this summer while I was attending the Brevard Summer Music Festival.  I was staying in an internet-less cabin so naturally, writing was easy considering the lack of distractions. 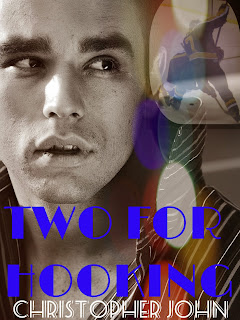 I did a thing....  I made a really crappy cover because I didn't want to work on a thesis paper.
(That's only kinda what Jake looks like... but I was using free royalty free images... so sue me*)
*Please don't sue me

I knew I’d write about a hockey player, because it's one of my crazy obsessions.  So I set out to create my own hockey league.  I didn’t want to use the existing NHL teams in an effort to avoid any awkward legal problems or to suggest anything too fan fiction-y (not that there’s anything wrong with fan fiction, I’d just like my characters to seem new rather than pre-existing in the reader’s head).  So I actually created a 24-team hockey league.  I made up where each team is located, their names (after researching each city to find a related team mascot), and their coaches, players, etc.  It seemed like a lot of work for a short story, so I’ve actually continued to write in this universe with the manuscript I’m working on now.

The title Two for Hooking is taken from a penalty in hockey.  One possible punishment for hooking is two minutes in the penalty box.  Voila.  It wasn’t all my doing however, a good friend named Justin was the one to suggest that it was a better title than my working title, The Light Fantastic.  The working title was way too haughty compared to what I'd written, and so it had to be dumped.

A huge thank you to Elyse, Wendy, RJ, Val, Nicki, and Justin for helping me through various parts of the story, editing, and all together making this story readable and this opportunity possible...

I hope you all enjoy Two for Hooking (available here for FREE).

Now for the reason you’re here.  Comment below to be entered in the running for a $5 gift certificate to Amazon (it's not much but it'll get you a free ebook in most cases!!).  Just make sure I can get to you somehow when you comment (i.e. e-mail, Facebook, Google Plus).  Competition for this gift certificate ends on 12-10-2013, 12:00AM Arizona Time (MST).

Chris
Posted by Unknown at 9:52 PM